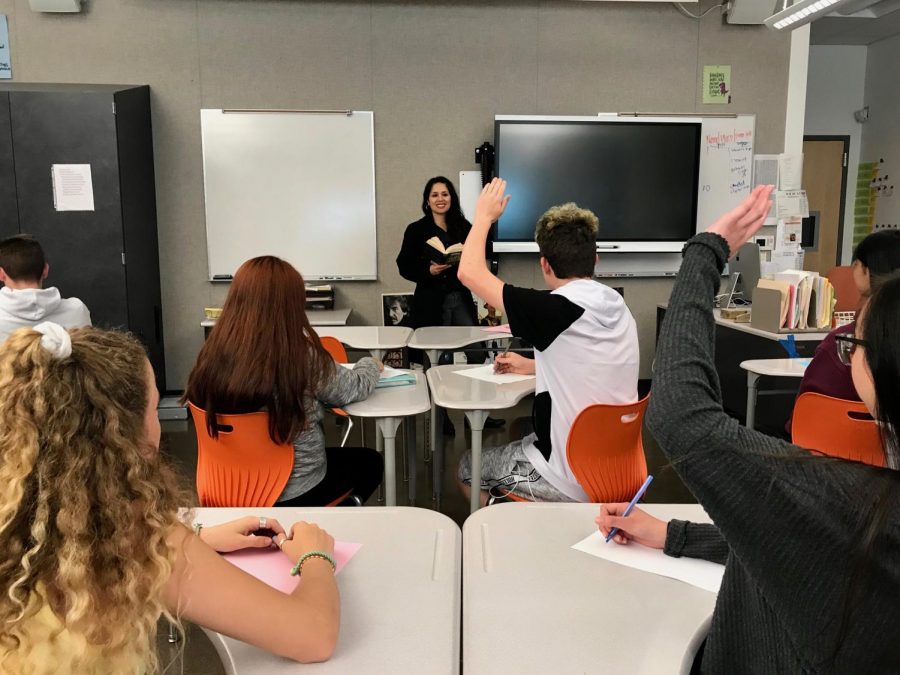 The N-word, R-word, homophobic slurs, and other offensive language can be heard in the hallways and classrooms at school.

Derogatory language is common in teens’ lives, and though its use has decreased, especially in liberal areas such as the Bay Area, high schoolers still face slurs and offensive language in their communities. Students at Woodside are aware of the negative effects of demeaning language and have a plan to stop it.

Despite being in a very liberal environment, Evans has heard the N-word used on campus and in other places in her community.

“When I hear the use of the N-word by people who are not part of this community that has been so negatively affected throughout history by the use of this word,” Evans said. “I feel not just uncomfortable but I feel like there’s this aspect of history that a lot of students are missing out on. Derogatory language in general has no place on a high school campus.”

Not only do racist slurs arise in the community but offensive terms that undermine people of disabilities are used equally as often. Caroline Daniher, a junior at Woodside, shares her connection with another affected community.

“I have a brother with cerebral palsy… he’s just like any other kid, so it’s hard that people use that degrading word,” Daniher said. “And just how some people might feel sensitive when other people use the N-word; I mean it’s the same scenario. It’s the same with saying, ‘that’s so gay’. It’s not acceptable now.”

According to Daniher, the word “retarded” has officially been changed to “intellectual disabilities” in education, politics, and health in 2009.

Daniher is the President of the local Forever Friends club who meets with Integrated learning system or ILS students.

“We meet with the ILS [integrated learning systems] kids every Thursday, and we just talk to them,” Daniher said. “We interact with them we are also trying to promote stopping the use of the R-word around campus because that is a big thing in our club you know we want to make sure that all kids at Woodside feel included.”

The LGBTQ community is also affected by hate language such as the use of the words “faggot” and “dyke.”

“I identify as gay, a lesbian,” Danny Whiting, senior at Woodside, said.

Whiting has experienced homophobic slurs being used by her peers.

“I think the most common one is teenage boys love the word ‘faggot,'” Whiting said. “When I was in the GSA one time in my freshman or sophomore year, an upperclassman got mad at us because we weren’t giving them free food from the bake sale… then he called us all faggots and then walked away. I think he meant it as a joke with his friends, but he obviously knew that it was a slur, and he knew that we were all gay.”

Whiting explains the feeling she has when hearing a slur used.

“You never really feel that way with any other words because like somebody could call you a bitch or say something mean, but it’s not the same as hearing a slur it’s so much more of a shock,” Whiting said. “It’s definitely surprising.”

Groups such as the BSU, Forever Friends, and GSA are coming together to create a positive language campaign supporting the removal of derogatory language. Danny has some concerns for the project.

“Kids they like to think that they’re just joking around and they’re not actually seeing the effects of it, and it worries me a little bit,” Whiting said. “Because I’m worried that people are going to be targeted more now that they’re addressing it, and it’s one of those things where it’s like ‘God, it really shouldn’t be this way; it shouldn’t be that as soon as you speak up for yourself, you’re going to get hurt more.’”

Evans discusses how she hopes the project will affect her community.

“I think through this project we can educate students on why the use of the N-word does have such a negative connotation,” Evans said.

Daniher explains how the persistence of demeaning language makes this project very necessary.

“I think it’s a great thing that we’re doing at Woodside because even though we promote a lot of stuff at Woodside, the issue is very prominent today, with a lot of these derogatory terms,” Daniher said. “I would really like to promote the stopping to use the R-word.”

Whiting still remains hopeful that the project will have positive results for her high school’s community.

“I’d like for it to work,” Whiting said. “I know that I try to always speak out… so I hope it actually makes an impact.”

Although these groups vary in identity, they all have something in common: a goal to stop hateful language and promote a safe, accepting environment for their peers.