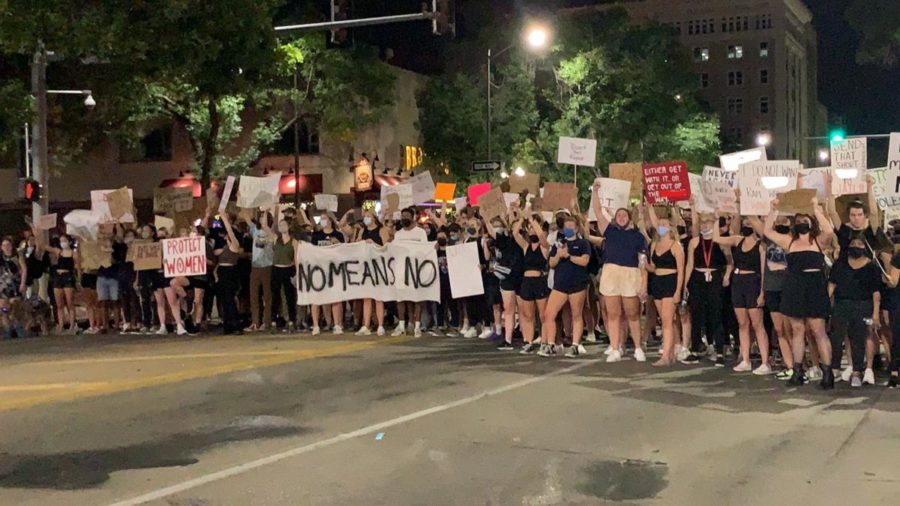 With these sexual assault allegations not being the first cases of sexual violence happening in fraternities, Female seniors at Woodside approach the next four years of life on college campuses with apprehension.

“Yes, I think it’s a big concern. With the party life, … there’s a lot of drinking involved.. [and] date rape drugs are often used,” Eloise Sampson, Woodside senior said. “It is scary thinking that I’m a potential [victim], and that my friends are potential [victims]. I do think it’s very real.”

After hearing of the sexual assault allegations against Fiji Fraternity at Lincoln Nebraska and the University of Iowa, Simpson felt for the girls involved.

“I mean, that makes me scared for people who are interested in sorority life because I do have friends that are interested,” Sampson explained. “It does make me fear for their well-being. And it does upset me and anger me knowing people went into …. sororities looking forward to it, looking for a community, and instead, they got hurt. That’s really saddening.”

“The fact that most frats… have kind of an image that they’re holding up, they have specific people who they recruit because they’re like, okay this person is like us,” Brault noted. “So maybe it is because of the individuals, but they go out of their way to make sure that all of those individuals are in the same place, and the system does sanction that. I mean I’m sure you’ve seen all the TikToks about the horrible thing that happened [sexual assault allegations against fratiernties]… in another school.”

According to CNN, men who join frats are three times more likely to rape than other men on college campuses. With statistics like these, Brault had noticed a “chronic rape culture” present within certain fraternities on most college campuses.

“Pretty much every college I’ve heard of, …t they say to the freshmen girls [that] these are the frats that you don’t go to because they will take advantage of you,” Brault said. “I know that my older sister who went to Cal Poly received that talk in her dorm, freshman year, and they’re like, don’t go here, here and here. They’ve had multiple sexual assault cases and things like that… go untreated or unrecognized, and if they do anything, they just shut down like the entire system; they don’t hold those people individually accountable.”

“The Southern California schools I’m looking at are very prominent with Greek life, and I think it’s pressured on me to do Greek life because of my siblings… They’ve been very active in the Greek system,” Rohlfes explained. “Even though it might not be the right fit for me, I’ll definitely look into it based on my family.”

Rohlfes sees that while there may be a reason for fraternities’ current reputation, it isn’t always deserved.

“For people who have been sexually assaulted at frat parties and all of that, I think that [fraternities] definitely deserve a reputation. We can’t just sweep that under the rug. For everyone that was mistreated in the fraternity and Greek life system, but I don’t think it deserves every single story, every single Greek deserves that title, negative connotation,” Rohlfes said.

“I think it’s more the culture of the fraternity where you’re supposed to be like a party guy womanizer type of thing. And it’s not really something that we should be teaching our generation or any generation really… So I think it’s the problem that the fraternities need to do something about.” Mashraki said.

“I definitely worry about that [sexual violence], and it kind of scares me,” Mashraki described. “But I’ve already experienced some of it. Some of the sexist comments I’ve gotten in like engineering class, or computer science boot camps are not really respectful, and I worry about it but I’ve become mentally prepared for it, which I shouldn’t have to.”

Brault found campus safety for women to be a major factor in determining where she will spend her next 4 years.

“I’ve been looking up the campuses, that … I might be interested in going to,” Brault said. “I’ve been looking ar some Reddit… specifically [pertainting] to [questions like] is there a lot of sexual violence and crime at the school. So I would definitely say that the fact that even is like something that occurred to me to do that means that I am very concerned about it going on.”

Rohlfes appreciated the reprimanding of those who are guilty, not only for the individual but the good of the whole.

“ I think anything to reprimand people that have done something wrong, especially when it involves women’s bodies, and rape is a really serious issue and to dismiss something like that is really terrible. Addressing it now… builds this wall of protection for people who are starting to look at Greek life, trying to make it a safer environment for people in the future,” Rohlfes said.