Fans look forward to the upcoming Netflix movies, despite the reputation of the earlier "Percy Jackson & the Olympians" films. 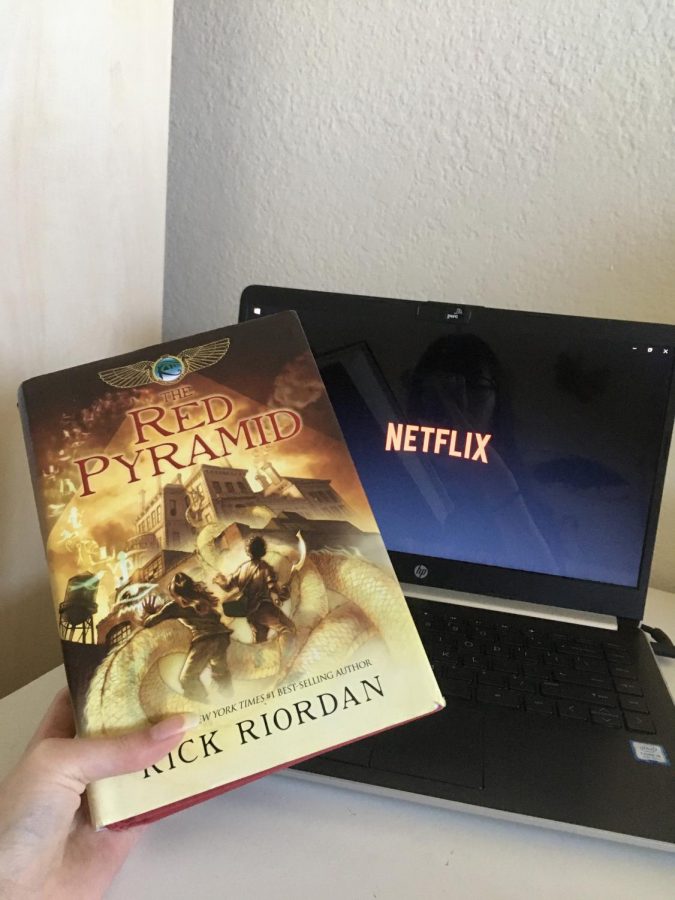 The "Kane Chronicles" are being adapted into feature films for Netflix.

Netflix will make the “Kane Chronicles” into movies, according to an announcement from Rick Riordan, the author of the series.

Riordan released a short video on Instagram on September 4, stating that the trilogy would be adapted into feature films for Netflix and that more news would follow soon. The “Kane Chronicles,” a New York Times #1 bestselling series, follows the Kane siblings as they navigate the world of Egyptian mythology and magic in a modern setting. Riordan is also known for the bestselling “Percy Jackson & the Olympians” series, which similarly takes place in modern times, but focuses on Greek mythology instead.

“There’s always holds and requests for ‘Percy Jackson’ all the time,” Luz Galicia, a library assistant at the San Carlos Library, said. “I always offer it myself, too, whenever I have kids looking for suggestions… I think it helps open kids’ minds to other cultures and histories.”

With a School Library Journal Best Book award and a Children’s Choice Best Book for grades 5-6,  the “Kane Chronicles” and “Percy Jackson” series are mainly known for their popularity in middle schools. Still, they remain enduring favorites among high school students.

“I really enjoy the ‘Kane Chronicles’ and ‘Percy Jackson’ series because I think the concept of mixing mythology with a modern setting is really interesting,” Woodside sophomore Clara Chiu said. “The writing and the plot are also really engaging, and I… learned a lot about ancient Greek and Egyptian culture and beliefs.”

The announcement for the “Kane Chronicles” movies follows Disney Plus’ plans for a “Percy Jackson & the Olympians” screen series, publicized on Riordan’s Twitter feed. The first two books of the “Percy Jackson” series were originally adapted into movies in 2010 and 2013 and gave way to widely negative reviews from fans and disapproval from Riordan himself.

“When I first read the script, I’ll admit I was plunged into despair at just how bad it was,” Riordan wrote in a 2009 letter to the producers of the original movies, suggesting revisions. “If I were intentionally trying to sabotage this project, I doubt I could have done a better job than this script.”

Riordan explained that he had no control over the movies and that his suggestions on the script were eventually rejected. Despite the original films’ notoriety, many fans look forward to the upcoming adaptations.

“I can’t say that I’m not a little bit worried, because I did watch the movies, which weren’t my favorite,” Elise Hadidi, Woodside junior, said. “But also… the books are such a high standard, [so] it’s hard to live up to [them]. But I am excited.”

With such a dedicated fan base built around the books (some fans even calling Riordan “Uncle Rick”), there is a high bar for the

upcoming adaptations. Some hope for improvement from the original movies, even if the remakes don’t fully live up to their expectations.

“I’m super excited for the new and updated version of the ‘Percy Jackson’ series because the [movie] — it just missed out so many key points of the book,” Galicia said. “The book is 300 pages long; you can’t put that into [an] hour-and-a-half movie. Books are always, always going to be better than the movies.”

Jascha Dolan, an English teacher at Woodside, appreciates how screen adaptations can reach those who may not be initially as interested in the books.

“I do think that [screen adaptations] open up storytelling to an audience that may not pick up the book… not everybody grows up as readers or is that captivated [by books], so I think screen adaptations are really cool,” Dolan explained.

The modifications made in book-based movies to better fit the silver screen can be controversial to fans. The significant plot changes and alterations in character arcs made in the “Percy Jackson” films, addressed by Riordan in his 2009 letter, largely contributed to the criticism they received from fans.

“I think the film directors should have some creative input on the plot of the movie,” Chiu said. “So I don’t think they have to follow the book exactly, but it should also not alter the key points of the book or change the viewer’s perspective of the characters. And I think that’s why the ‘Percy Jackson’ movies did so poorly.”

With fans looking forward to the upcoming screen adaptations, hopefully, Netflix and Disney will improve from the “Percy Jackson” films.

“I just think that in the fandom, there’s so much love for this series that if it doesn’t live up to the hype, then it’s going to get a lot of hate,” Hadidi said.