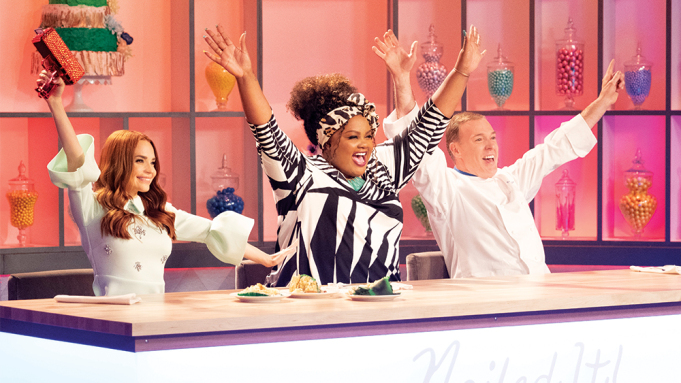 The anticipated and zany baking competition series “Nailed It!” released its fourth season, and not a moment too soon.

“Nailed It!” is a reality baking show which first debuted on Netflix two years ago in March 2018. It has great ratings, with a 100 percent on Rotten Tomatoes and a 7.4/10 on IMDB. Hosted by comedian Nicole Byer and chocolatier Jacques Torres, along with a new judge every episode, it features amateur bakers needing to recreate sophisticated desserts in order to win a $10,000 cash prize and the “Nailed It!” trophy. Some of the challenges include edible ice cream boomboxes made with liquid nitrogen, cakes shaped like a sphinx and a whale, and deep-fried cowboy-duck doughnuts.

Season 4 included many wild episodes with baking themes ranging from Shakespeare to the Olympics to wedding extravaganzas. It was full of entertainingly horrible attempts to replicate “fancy” cake art, one example being when baker Larry Nelson created a sloth cake in the episode “Jungle Bungle.”

“Nailed It!” is like the amateur version show “Cake Wars,” which aired from 2015 to 2019. Cake Wars is also a baking competition, except it included professional bakers.

Things around the world are pretty bad right now. A virus is sweeping the world, taking the lives of many and forcing the world into isolation. Because shelter-in-place is happening, people are finding themselves watching more and more television. We’re needing distractions, but mostly importantly, we need joy. “Nailed It!” is exactly the show that can provide us with that joy. It will make you roll your eyes and laugh, and it’s an escape from everything else happening in the world right now.

Overall, “Nailed It!” is a great series with many hilarious moments, a parade of celebrity guest judges, and wild new themes.