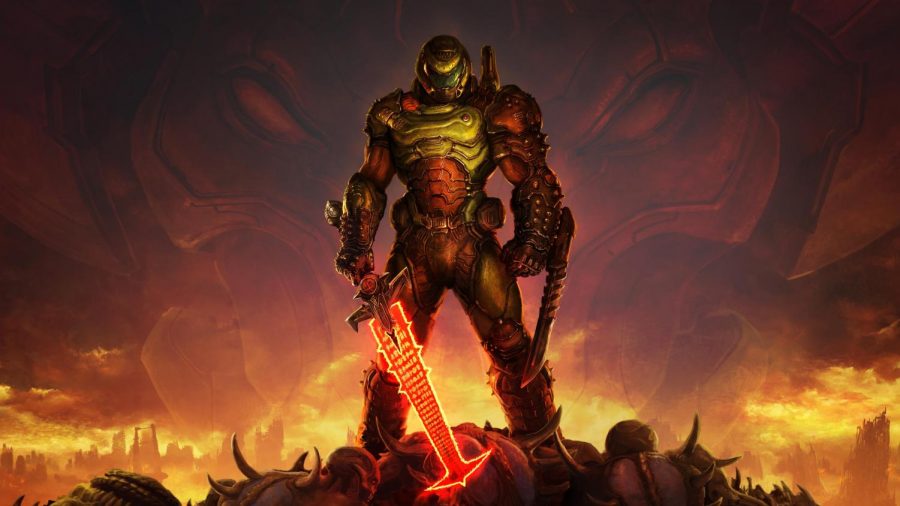 When I played “Doom 4,” I enjoyed it a great deal. So, naturally, I was curious if the recently-released “Doom Eternal” could improve upon what “Doom 4” created. Most games have a sort of ebb and flow to their combat, but not so with “Doom.” “Doom” applies constant, relentless pressure on the player.

The first “Doom” game, one of the first first-person shooters, came out in 1993. Since then, although “Doom 4” was good but failed to completely capture this original exhilaration, “Doom Eternal” was more successful; “Doom 4” walked so “Eternal” could fly.

“Eternal” puts unending pressure on the player, but this pressure is manageable due to the speed that the main character, the Doom Marine, possesses. In “Eternal,” you can outmaneuver the hordes of demons coming after you because of the new mobility system, which includes a double-jump and two dashes. This additional movement— along with jump-pads and bars that your character can use to swing off of—allows the Doom Marine to traverse any arena extremely quickly. This is fantastic because it allows the game to feel faster and more open. However, the additional mobility has also been paired with a selection of bigger arenas with more vertical play, which in turn attracts more aggressive enemies in larger numbers.

The weapons are similar to “Doom 4,” but that’s not really a problem because the weapon system is already great. There is a large selection of versatile weapons, each with their own upgrades, which really add the spice to each weapon. For instance, the double-barrel shotgun can have a grappling hook attached to it to help close the distance between you and the enemies. With two main upgrade paths for each weapon, the “Doom” combat system keeps itself varied and interesting.

It is also worth noting how resources are obtained. Most other games would have health and ammo pickups before and after a fight. For example, if you kill an enemy, you can steal ammo from their corpse. In “Doom Eternal,” however, resources are obtained based on how you kill an enemy. For example, if I need armor, I can shoot an enemy with my shoulder-mounted flamethrower, and they will drop armor as they burn. If I need ammo, I can use my chainsaw to burst them open like piñatas stuffed with ammunition. If I need health, I will use the glory kill mechanic.

To use the glory kill mechanic, an enemy must be damaged enough to enter a staggered state. Then, your character can perform an ever-entertaining and unbelievably violent execution, which will drop health for you to pick up. This glory kill animation will change based on the enemy type and your position relative to the enemy, which I feel keeps things varied and interesting.

“Doom Eternal” also comes with a multiplayer mode, which consists of two player-controlled demons against one player-controlled Doom Marine. The Demons can spawn additional enemies for the Doom Marine to deal with while he tries to isolate one of the demons to try and kill it. The Doom Marine has to kill both demons within 20 seconds of each other to win the game, and the demons have to kill the Doom Marine to win the game. While this game mode is entertaining and certainly unique, I doubt it will have any long-term staying power as it does not appear to have the depth needed to make it more competitive. But, that is to be expected from a multiplayer that is added on to what is really a single-player game. And, while this multiplayer surpassed my expectations, it will likely never catch on in any significant way.

Finally, the only thing left to do is to get the hang of the controls, which I feel are significantly harder than “Doom 4” due to the plethora of abilities at your fingertips. Once you do that, this game makes you feel like an unstoppable force of nature and allows you to succeed in eviscerating hordes of demons. “Doom Eternal” is everything “Doom 4” lacked and more. I really have trouble finding any fault with the game; it is one of the most exhilarating single-player games I have ever played.

Overall, I would absolutely recommend “Doom Eternal” to anybody who wants a high-intensity and action-packed single-player experience. It is a blast and a great way to spend your day, especially if you’re stuck in quarantine.