Tiger King: A Look Into the Crazy Life of Big Cat Owners

"You don’t really love them; you’re just collecting them." 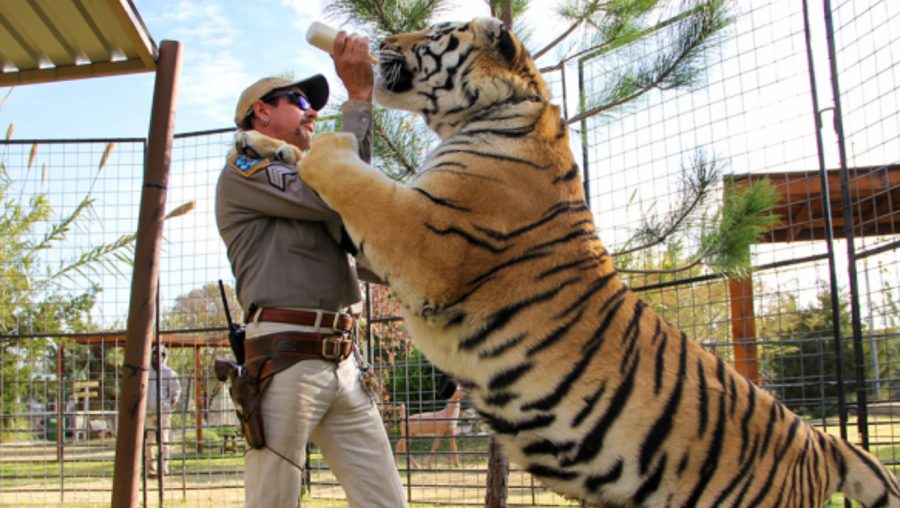 “Tiger King: Murder, Mayhem and Madness,” a seven-episode mini documentary series that explores the chaotic life of big cat owners and breeders, is currently the most watched show in America.

The docuseries is centered around Joe Exotic, a gay man in a polygamous marriage who sings his own country songs and makes music videos. Exotic founded the Greater Wynnewood Exotic Animal Park (G.W. Zoo) in Oklahoma and is currently serving a 22-year prison sentence for hiring an assassin to kill his nemesis among other animal welfare charges. His nemesis, Carole Baskin, owns an animal sanctuary in Florida and publicly bashed Exotic and his park for mistreating their animals, which eventually led to Baskin and Exotic’s public feud.

Exotic and Baskin’s feud lasted for years. Anytime that Baskin mentioned Exotic or his zoo, Exotic would respond by posting a hateful video about Baskin on his website. Exotic’s videos often went too far, and he was sometimes heard threatening to kill Baskin. In one video, Exotic is filmed while he holds a gun up to a dummy he dubbed Carole Baskin.

Despite Baskin’s strong opinions towards the way Exotic treats his animals, she too does not have the best conditions for her sanctuary’s big cats. Baskin’s hypocrisy just added fuel to Exotic’s fire, as he tried to expose Baskin and her apparent flaws.

At one point in the series, it is revealed that Baskin’s past husband mysteriously disappeared after they had a big fight. This news, along with theories about it possibly being murder, sent Exotic off the rails. He made it his mission to let everyone know that Carole Baskin killed her husband and fed him to the tigers. He even made a music video that featured a woman who looked remarkably similar to Baskin, feeding fake body parts and flesh to a tiger.

The series essentially investigates the underlying conditions that contributed to Exotic’s chaotic lifestyle. Exotic’s childhood was very traumatic: not only was he verbally abused by his father who claimed that he did not love his children, but he was also openly gay at a time when being gay was not widely accepted. Throughout the series, Exotic reveals the contributing factors that damaged him the most, including physical, emotional, and sexual abuse. These past traumas caused Exotic to inflict the same type of treatment onto both his animals and workers at the zoo.

Joe Exotic’s hectic life may seem intriguing to some. Who doesn’t want to play with tiger cubs all day? However, the reality of Exotic’s life is much more complicated than merely owning and breeding a few tigers; Exotic’s zoo was home to more than 230 big cats.

“He… victimized the animals that he was keeping,” revealed Eric Goode, one of the directors of “Tiger King.” “If you keep more than 230 tigers, it’s like having 230 children. You don’t really love them; you’re just collecting them. He wanted to be the guy with the most tigers — the tiger king.”

Tiger King is definitely worth watching if you enjoy seeing how people in other parts of the country live. I was also shocked to find out that all this happened in the past couple of years, considering I had never heard about it or seen it in the news.