No Eyes for the Current Darkness: Why a 40-Year-Old Book Has Become Relevant Today

A Review of Dean Koontz's "The Eyes of Darkness" 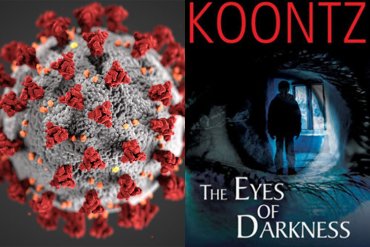 The Eyes of Darkness by Dean Koontz is said to contain a prediction to the current coronavirus, however this may just be a coincidence.

This review is spoiler-free!

“Chilling.” “Gripping.” “Kept me on the edge of my seat.” An “emotional wringer.”

That’s how various papers, websites, and amateur book reviewers described Dean Koontz’s 1981 thriller, The Eyes of Darkness. However, it’s not just the suspense, the appearance of the supernatural, the dash of romance, or even the book’s ability to leave you reading it for three to four hours straight with only a glass of water by your side that leads to its current appeal—an appeal that has led to used paperback copies of the book selling for as high as $500 on eBay. These astoundingly high prices are a result of only one paragraph in the book: one that supposedly contains a prediction of the current coronavirus pandemic.

The story starts in medias res, or right in the middle of the action, and relies on flashbacks, dreams, and memories to set the scene. The whole plot of The Eyes of Darkness revolves around a former Las Vegas showgirl named Christina Evans who attempts to find out if her son is still alive, after being haunted by various strange nightmares more than a year after his alleged death during a Boy Scout trip.

Along the way, she meets lawyers, producers, hitmen, pilots, hypnotists, an ex-husband, and an uber-wealthy family heir turned boss of a secret government project, all of whom try to help—or hinder—her search.

The book takes place in both the strip and not-so-casino-heavy part of Las Vegas, Nevada, but also follows some of the characters to nearby Reno as the mission progresses. Finally, they end up in the middle of the Sierras on a cold, blizzarding night. Talk about a change of scenery! And, it all takes place in the four-day period around New Year’s!

Koontz makes use of the short time frame by adding in a surplus of details and switching perspectives to different characters in completely different locations. This allows for the novel to be much more interesting, as these perspective-switches occasionally reveal details that soon turn out to be important as the book progresses.

Koontz is regarded as a thriller-suspense author, and the novel has enough of these two features while still remaining the perfect book for when a much-younger sibling wants you to read them a scary story but is too young for a Stephen King or Peter Straub novel.

For the lovers of romance, this book also has some of that. The protagonist finds herself in a relationship with lawyer Elliot Stryker, who then embarks on a horrendously dangerous quest with her after knowing her for only 72 hours. I honestly don’t know of any couple married for 40+ years who would attempt that, and yet, Stryker proves to be a vital piece in Evan’s desire to know what really happened to her son. If that isn’t romance, I don’t know what is.

However, most people are currently attracted to the book because of its mention of the virus Wuhan 400. Even with the coincidental name, Wuhan 400 has some key differences that separate it from the one causing the current coronavirus pandemic. According to the story, Wuhan 400 was created in a lab and is 100 percent deadly while the virus that causes COVID-19 came from either a bat or a pangolin (or both) and kills only about 2 percent of people it infects. The virus doesn’t even play a large role in the majority of the book, only being introduced in the final two chapters.

While the novel doesn’t contain a full prediction of a terrible event as did  Morgan Robertson’s The Wreck of the Titan (which unintentionally predicted the sinking of the Titanic a full 14 years before the actual tragedy in 1912) or even any sort of prediction at all, The Eyes of Darkness by Dean Koontz still combines suspense, thrill, romance, and a little bit of the supernatural to create an extremely addictive, 350-something page novel that is thrilling enough to keep you hooked for some time.  However, it also features no jarring plot twists or horror to startle you out of your couch, making it perfect for a lazy bout of relaxing while sheltering-in-place… if you can get a cheap-enough copy, of course.