“Contagion”: Why the 2011 Film is Spreading in Popularity

How a thriller/drama movie has become our reality, and how it hasn't. 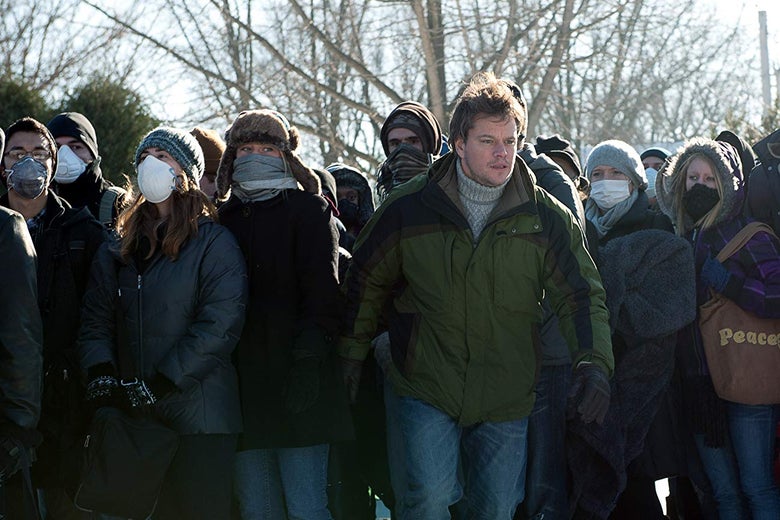 Sitting in Advanced Placement Biology class last year, I never could have imagined that the fictional thriller we were watching would come so close to our current reality. “Contagion,” a 2011 film, has become the third most popular movie on iTunes as of last month, making it the only film in the top ten that was not released in 2019. Its eerie similarities to the current COVID-19 pandemic have made the film possibly even more popular than it was during its initial release.

“Contagion” begins following the everyday family man Mitch Emhoff (Matt Damon) as he navigates the explosion of a deadly virus that ravages both his family and the global population. Damon portrays Mitch with just the right balance of intelligence, nobility, and the expected limitations of an ordinary citizen in a pandemic situation. Gwyneth Paltrow also briefly lights up the screen as Mitch’s wife, Beth Emhoff, a vibrant woman returning from a business trip in Hong Kong. Upon her return, Beth appears sweaty and fatigued. When she has a seizure, Mitch rushes her to the hospital, and she quickly dies of a novel virus contracted during her trip (though this cause is not yet known).

Director Steven Soderbergh and writer Scott Burns consulted real-life epidemiologists during the making of the film, presumably with the belief that the scariest and most engaging films are the most realistic ones. The MEV-1 virus in the film was slightly inspired by the 2009 H1N1(swine flu) outbreak and the 2003 SARS outbreak, but the virus is mostly hypothetical, as the filmmakers consulted Ian Lipkin, the director of Columbia’s Center for Infection and Immunity, to create the most realistic cinematic simulation of a modern pandemic. The quick pace of the film is mixed with realistic scientific explanations for the origin of the virus and the eventual development of the vaccine, making “Contagion” scarier to watch than most films, especially for its current relevancy. Though zombie virus thrillers like the 2013 horror/action film “World War Z” can be entertaining, we can at least bask in the comfort of knowing there will never be a zombie outbreak. But even when watching “Contagion” a year before our current pandemic happened, something told me that a situation like that in Contagion was not as impossible.

“The average person touches their face three to five times every minute, in between touching doorknobs, water fountains, and each other,” says Dr. Erin Mears, an Epidemic Intelligence Service officer played by Kate Winslet, who traces the virus back to Beth in Minneapolis.

Winslet went to the Centers for Disease Control and Prevention (CDC) and consulted real Epidemic Intelligence Service officers in preparation for her role. As a result, her character displays the fearlessness and logic that real health workers show when facing dangerous, and often necessary, exposure. According to Soderbergh, Winslet’s character also serves to provide real information on the modes of virus transmission and the effects of social distancing on lowering spread.

In the current pandemic, the CDC recommends people avoid COVID-19 with proper handwashing and avoiding touching our faces. Almost all people globally are now under orders to practice social distancing. And, just like in the film, health workers and government officials are scrambling in a race to develop an effective vaccine, and hopefully an effective therapeutic in the meantime.

That still doesn’t stop others from trying to exploit desperate and fearful civilians with fake cures. Jude Law effectively plays a conspiracy theorist named Alex Krumheide. Alex is a wily, conniving pot-stirrer who attempts to boost the sales of forsythia, a homeopathic drug that he falsely claims cured him of MEV-1 (the virus’s name in the movie). Law’s portrayal of the character is eerily akin to the real-life Frank Ludlow, a 59-year-old man from the UK who was recently arrested for selling fake coronavirus remedy kits.

“For me, sort of the metaphor that kind of availed itself to me to the research was this issue of the internet and information and how the two imitate each other, how they’re the same way, a virus spreads out is very similar to the way information disseminates itself and what that does to human behavior,” said writer Scott Burns.

Even the origin of the virus bears a striking similarity to the current research on the origin of COVID-19. In the film, the MEV-1 virus is eventually traced back to bats and pigs in Hong Kong. Scientists believe that the current COVID-19 crisis may have also originated in bats.

However, despite these scary similarities, we also have to acknowledge the significant differences between “Contagion” and the pandemic we’re currently facing.

In “Contagion,” scientists predict a mortality rate of 20-30%, with 1 in 12 people in the global population becoming infected. The World Health Organization (WHO) estimated the COVID-19 global mortality rate at 3.4% as of March 3. This is not at all to say that we shouldn’t take COVID-19 just as seriously, but it is a reminder that even in its attempts to be realistic, “Contagion” simulates a virus that is much more deadly.

Another difference is the unexplained immunity of Mitch who is sent back home to his daughter after he is isolated and determined to be immune to the virus. It may be possible that some are immune to COVID-19, but there has been no data of this and it is highly unlikely. Some COVID-19 survivors may have some immunity to reinfection, but it is also still unclear how long this immunity may last if it even exists at all.

Despite these differences, “Contagion” is still a positive reminder of who becomes most important in crises such as these. In addition to Dr. Mears, “Contagion” also features Dr. Ally Hextall (Jennifer Ehle), a virologist at the CDC who develops the MEV-1 vaccine, and Dr. Leonora Orantes (Marion Cotillard), an epidemiologist from WHO who investigates the origins of the virus in Hong Kong. Though these doctors are characters, they depict the real people who are vital in this current pandemic.

“You have to be incredibly determined to do this work,” said Winslet about the CDC workers she consulted in preparation for her role. “These are people who can be sent into war zones where there’s been an outbreak of a new virus. Fear is not an option. If they feel it, they learn to push it aside.”

Here’s my final piece of advice: if you’re searching for a semi-realistic depiction of what is happening right now, and maybe even a bit of catharsis, definitely watch “Contagion.” It’s gripping, realistic, and it even has a lot of scientific accuracy for a fictional film, so you might learn some things. But remember: this pandemic is not nearly as bad, and, like the society in the movie, we too will get through this together.