Charli XCX released the first song from her upcoming quarantine album on April 9. 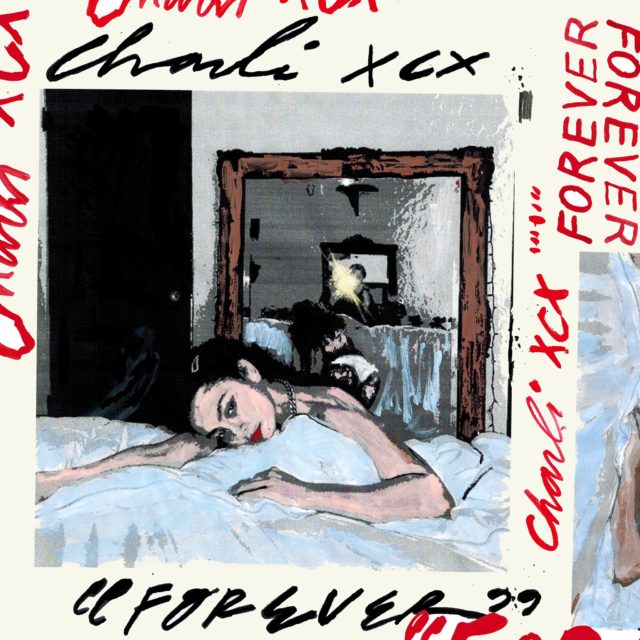 Charli XCX posted three interpretations of the same photograph to go with her song "Forever." This version was painted by Seth Bogart.

The first fruit of Charli XCX’s upcoming quarantine album has arrived in the form of “Forever,” a love song that blazes through its four-minute length with invigorating experimentation and catchy pop hooks.

Charli is using her quarantine to give her fans an unprecedented glimpse into the creative processes that go into making pop music. “Forever” began as a vibrant, EDM-based instrumental snippet posted to her Twitter on April 7. A few hours later, it morphed into something more romantic and subtle on her Instagram live. On her Instagram stories, however, it became an exhilarating, noisy mess. After a few days spent letting fans give their input on the song’s cover art, “Forever” was finally released as a mix between every version that had been previewed.

The song begins with a cluttered, distorted melody that opens up into the song’s first verse, a poetic ballad moving at breakneck speed. Amidst lyrics about “love suicide” and “driving for miles,” white noise mingles with beautiful, flowery chords in a hypnotic back-and-forth pattern. It perfectly replicates the feeling of driving down a long road at dusk, or of riding a galloping horse on a sunset-lit beach.

Things get toned down in the chorus, mainly focusing on the mantra “I will always love you / I’ll love you forever / Even when we’re not together.” A.G. Cook, who co-produced the song with new collaborator BJ Burton, brings his signature soft, layered chords to this section, elevating it beyond the mere repetitive hook it could have been. While the original, dancier snippet first posted to Twitter is nowhere to be found on this song, the switch to something calmer is a welcome one.

One of the more notable sections of the song is its bridge, which uses near-excessive distorted bass and synths to bring the emotional arc of the song to its climax without feeling too indulgent or toneless. Similarly, the mumbled outro serves to bring the song to rest. However, it’s so brief that it makes the song practically necessitate a relisten.

If I have any complaints, it would be that the amount of fan input into the creation of this song was vastly overstated by Charli. While she claimed that her listeners would be able to help her write and produce songs, as well as create track artwork, the most people could do to influence the direction of this track was choosing one of three selfies to be the song’s cover art. Though this criticism doesn’t detract from the quality of “Forever,” it could prove to be a larger issue in the future. Nevertheless, if “Forever” is any indication, Charli’s upcoming album will be a masterclass in DIY experimental pop.