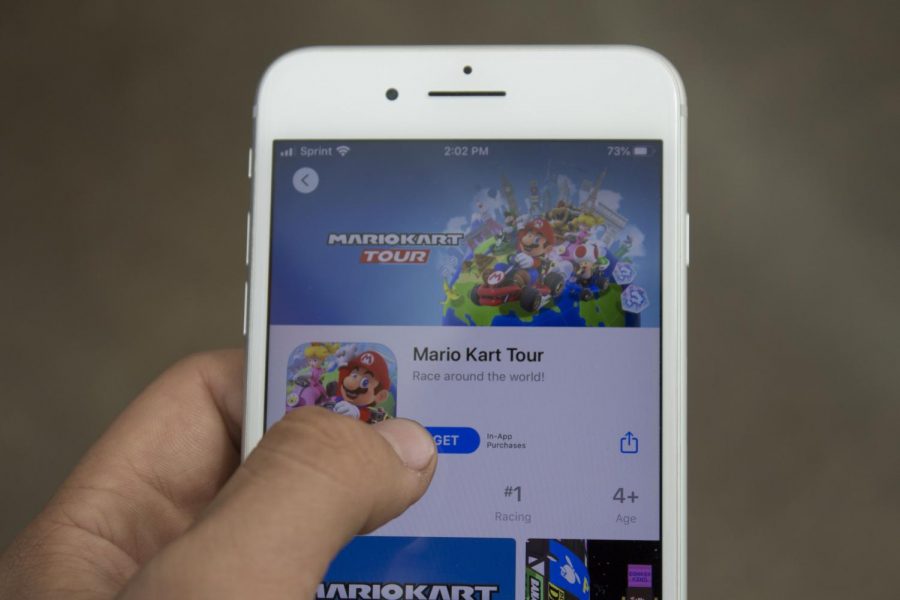 A student downloads the "Mario Kart Tour" mobile app on their phone.

“Mario Kart Tour” is a racing game based on the “Mario Kart” series. “Mario Kart Tour” was met with immense popularity following its release. In its first day of being on the App Store, the game amassed over 10.1 million downloads.

“I’ve seen pretty much everyone I know playing and talking about it,” explained Ethan Ley, a Woodside sophomore. “Even the people that don’t have the game… usually like talking about it or watching people play it… It’s a very big game right now.”

Many players downloaded the game as soon as they could.

“I got the game the day it came out,” said Connor Williams, a Woodside freshman. “I’ve had the game for over a little over a week now.”

A large factor in the game’s popularity is its accessibility.

Most students have a generally positive view of the game.

“It’s fun, and it’s I think it’s really cool,” said Amelie De Leon, a Woodside sophomore. “It’s like playing the game but on your phone, and I think they did a good job with the game. They just need more characters and courses.”

Williams had a different opinion on the game.

“I’m kind of mixed about Mario Kart tour,” Williams expressed. “It’s not really that good [and] there’s a lot of repetition, like tracks being reused. For example, tricks, and reverse tracks.”

Williams also points out the new problems with having a membership system.

“I also I don’t like the microtransactions,” Williams stated. “Some [characters] are only exclusive to Gold, which is the game’s form of any subscription… Sometimes you need… a gold pass to play as those characters and do well. So, it feels more like a pay-to-win gimmick.”

Though the game is well-received, there are still things that need to be improved upon.

“I think it’s a good game,” Ley explained. “It just needs a bit more development in terms of how people can play and how the game should just act… It’s very early in development right now, and so it’s kind of hard to give an opinion on it.”