Many dogs face crippling anxiety on a daily basis. 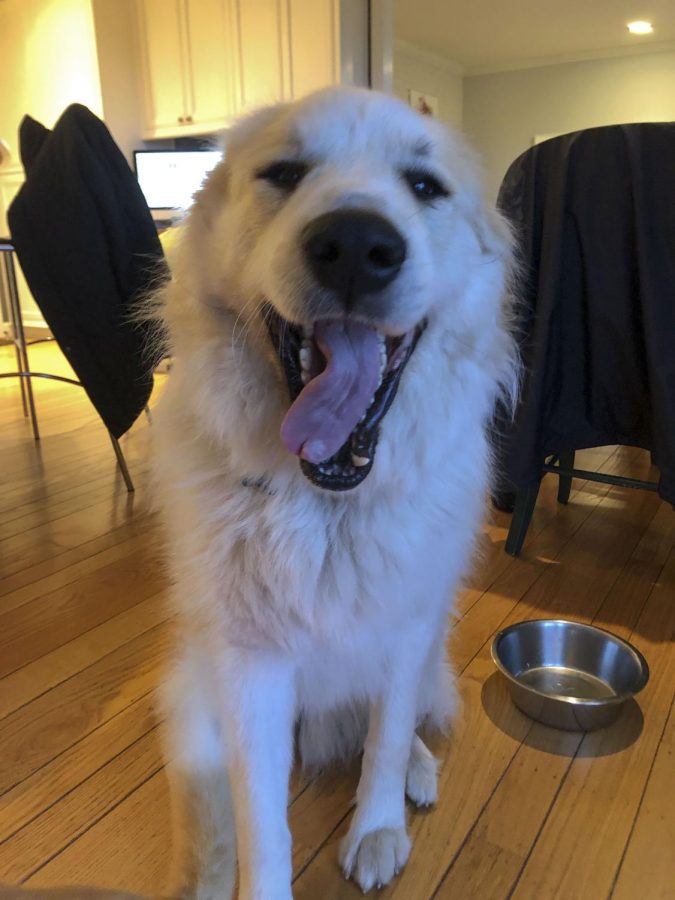 This picture was taken in the morning while my whole family was home. Beau's true personality is able to shine because his separation anxiety is not overcoming him.

Most people think dogs must have the most relaxed lives: staying home, going on walks, eating, and sleeping. However, in reality, many dogs actually face crippling anxiety.

Two years ago, we got a Great Pyrenees named Beau, but because Silicon Valley is so expensive, my parents both have to maintain full-time jobs and often work late, which leaves Beau lonely for hours.

“I would say it’s separation anxiety if I had to label it,” my mom Ellen Bertine said regarding Beau’s loneliness. “It seems like when we are gone for long periods of time he gets really stressed out. When we are not home for a long time, he will bark and bark and bark.”

Bertine often feels extreme guilt that she cannot stay home and cuddle with him all day and has turned to products to try to lower his anxiety level.

“We have had someone come visit him during the day, but that didn’t seem to be enough and was really expensive, so we tried to give him a good walk before we leave for the day,” explained Bertine. “We finally had to turn to CBD oil, and then we even got him a second dog to keep him companion because we thought that might help his loneliness. It didn’t really; it has just kind of doubled the barking.”

“We are still kind of waiting on the Prozac,” stated Bertine. “It’s been about three weeks but they said for maximum effects you have to wait a month to three months, but he is less aggressive and there’s probably a bit less barking.”

“Anxiety is going to be in the form of the ears being laid back, the tail being down, an overall crouching,” Lisa Bastian, the manager of Bow Wow Meow, a pet supply store in San Carlos explained. “It can be separation anxiety, noises, new places, other dogs but most of the time anxiety is going to come down to working on desensitization training and exercise.”

If the anxiety becomes extreme, some dogs are even prescribed anxiety medications, similarly to Beau.

There are certain medications, very similar to what people are on for anxiety disorders like Prozac, or Fluoxetine,” Yessica Yick, a veterinarian at the Holly Street VCA animal hospital described. “Some of the aggressive kind of dogs, they’re on something more called Xanax before they come in here so we can actually touch them [and] put a muzzle on, because who likes going to the doctor.”

“Depending on the dog, the thoughts are that having another companion can help alleviate some of the symptoms or stress they feel,” Yick stated.

Unfortunately, when anxiety is very strong, it doesn’t work out this way for the newer dog.

“If they see a dog or their friend getting scared, nervous, [or] barking, there are some dogs that actually learn that behavior weather its destructive, noisy, barking, etcetera,” Yick said. “So, it’s almost worse.”

Hopefully in the future, there can be a better solution to help limit anxiety in dogs and people.