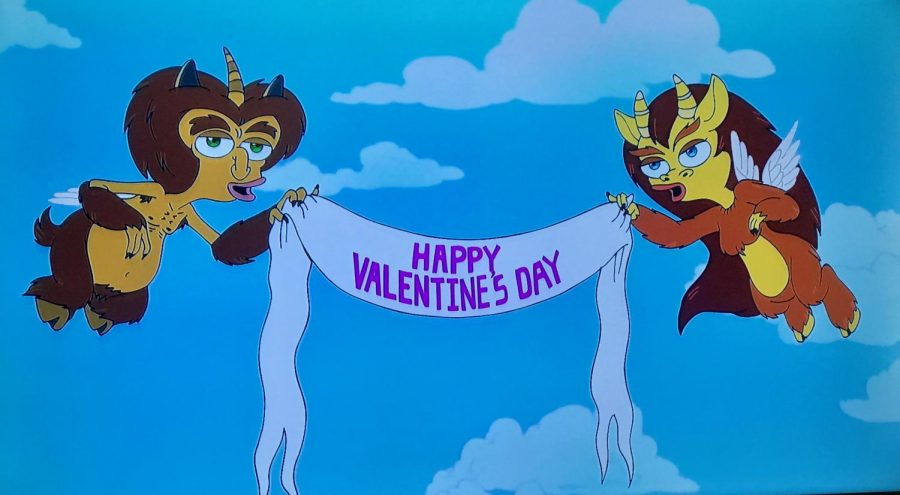 The Netflix show Big Mouth released a Valentine’s Day special, “My Furry Valentine,” that turned our #foreveralone tears into tears of laughter. Valentine’s Day can be a rough day for insecure teens trying to figure out what love means to them, all while dealing with pimples and mood swings. In the premiere of season three, the show’s comedian creators save us once again from the horror of puberty by letting us know we are not alone.

The Netflix original surprised fans on February 8 with the special release of a 45-minute feature episode about Valentine’s Day starring all the usual characters but with the addition of a new documentary-style interview.

Many Woodside students, including junior and Big Mouth fan, Stephanie Gerson, watched the special with a friend.

One favored part of this episode was the blossoming friendship between Matthew, a gay tween, and Jessi, a straight girl. Their unity described a part of Valentine’s Day that is not romantic: instead, it reflected the heartwarming comfort received through meaningful friendship.

“I did like the part [where] Matthew and Jessi [stood] together for Valentine’s Day,” Woodside junior Isabel de Oliveira said. “They stuck together. They were outcasts during that whole situation in terms of Valentine’s Day.”

“Honestly, I really liked when the girl went on the date with the gay kid; I think it’s so cute that a girl has a gay best friend that they can just talk to about anything,” Fex explained.

In the episode, the tweens performed a song at the restaurant titled “Who Needs a Boy.”

“They sang together, and that was so cute,” Fex said.

Sarcastic musical numbers have been featured in episodes of Big Mouth, including a remake of the “Cupid Shuffle” and an original piece sung by a tampon called “Everybody Bleeds.”

The emotional and physical journey of puberty is what the show focuses on through their middle school characters. Though events within puberty are hyperbolized for effect, they are extremely relatable to anyone who has gone through (or is currently going through) those changes.

“It makes me feel like I want to say ‘oh, I’m not alone,”’ junior Dominic Constantz said. “Like I went through this horrible experience like everybody goes through it and it just makes it seem all the more funny because you can just relate to it so well.”

Some humor used in the show is rather crude or close to offensive but watchers consider this the style of the show. Co-creators, Nick Kroll, Andrew Goldberg, Mark Levin, and Jennifer Flackett draw viewers to the show because of recognition.

“I think definitely more people watch the show because they knew the creators,” Gerson said. “Also, the voices are very recognizable.”

From a teen’s perspective, you might say the creators’ ages might be a disadvantage in creating a show about the early teens. However, the point is that everyone goes through puberty- and clearly these directors, writers, and actors haven’t forgotten how it felt.

Isabel de Oliviera explained how her reason for watching “Big Mouth” came from voice actor and comedian John Mulaney, who plays a character named Andrew in the show.

“I started watching Big Mouth because friends had told me about it, but also because John Mulaney is in it,” de Oliviera said, “and I like his comedy specials a lot… and Nick Kroll is absolutely hilarious.”

With amazing contributors, relatable characters, and entertaining songs, you’re in for a great watch with Big Mouth. It is very deserving of its 100% score on Rotten Tomatoes. This amazing episode of Big Mouth teaches viewers that Valentine’s Day isn’t always about romantic love, and spending Valentine’s Day with a gay best friend, girlfriend, your parents, or even with no one, is just as acceptable as spending the day with a significant other.

In the words of Big Mouth’s beloved character, Matthew, “everyone deserves a chance at love, even your dried-out old mom.”