Romaine lettuce has been infected by a dangerous strain of E. coli, getting many sick. 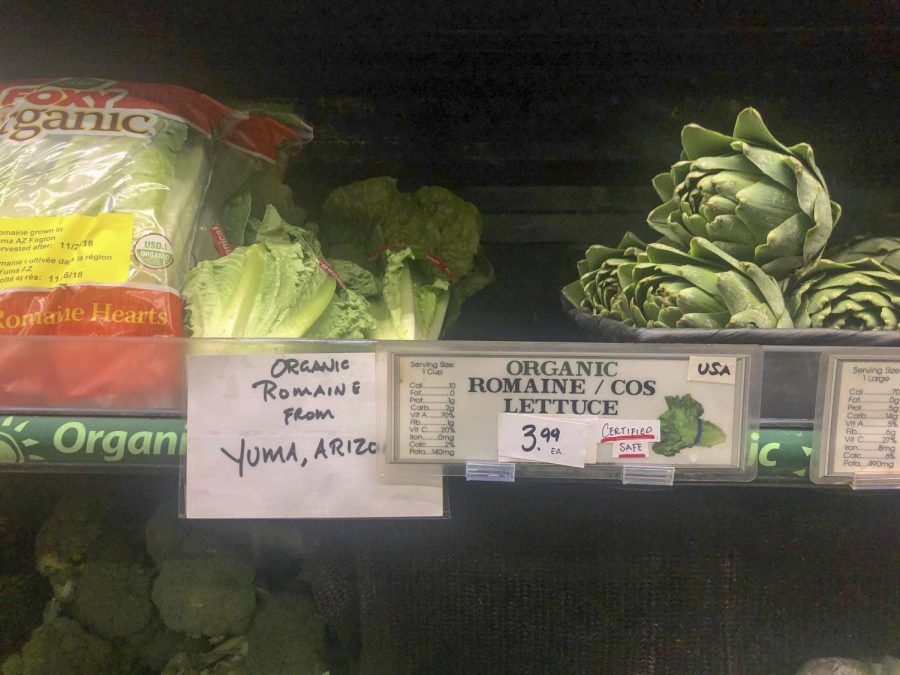 The new romaine labels have been put into place at Bianchini's market in San Carlos.

People around the country, including Woodside High School students, are being forced to throw out their romaine lettuce due to the lettuce in California farms being infected by E. coli.

Escherichia coli O157:H7, a rare form of E. Coli, is extremely dangerous because there are no vaccinations or medicine available to get rid of symptoms and it has the potential to painfully damage the lining of the small intestine. The toxin in this dangerous strain of E. coli contains a toxin that has potential to damage the lining of the small intestine which can be very painful. Unfortunately a multistate outbreak of E. coli has started to occur due to the romaine lettuce farms in central California, affecting 47 people around the U.S.

According to the Food and Drug Administration (FDA), “Traceback information from four restaurants in three different states so far has implicated 10 different distributors, 12 different growers, and 11 different farms as potential sources of the contaminated lettuce.”

Last week the FDA made it clear to restaurants, markets and households that the infected lettuce must be destroyed immediately and more recently companies that sell romaine have gotten new labels proving they are not infected.

“The FDA sent out a letter to all the businesses that carry romaine so that they could take necessary actions to keep customers safe and satisfied steps,” Isaac Deutch, an Employee at the Old Port Lobster Shack in Portola Valley explained.

People who decide to take the risk and eat the infected romaine may experience symptoms such as abdominal cramping, bloody diarrhea, and vomiting.

“My family had romaine in the refrigerator before they took it out of markets,” Shai Dickman, a freshman stated. “Yesterday for dinner we had a salad with romaine lettuce, but thankfully I am feeling fine.”

Luckily, stores were very quick to dispose of the infected product and even took further steps to prevent people from eating it if they had already bought it.

“My parents had to throw out the romaine they bought at Costco,” Johnathan Czarnecki, a junior at Woodside, said. “Costco sent out an email explaining how their product was more than likely affected by the outbreak.”

Technology has been a very helpful resource to bring awareness to people who may have not known about the outbreak and had romaine already.

“I was browsing the news section of Snapchat and the very first thing that caught my eye was that a headline said ‘Don’t Eat the Trader Joe’s Salad’,” Cryan stated. “Knowing I had a Trader Joe’s salad at home and because I work there I clicked on the article and was educated about the recent E. coli outbreak.”

Now that the FDA has found out where the infected product came from, they have given markets and stores permission to start selling romaine again. The infected lettuce seems to have occurred in November in mid-California farms, but people across the U.S.were affected because the farms distribute lettuce throughout the country.

Scott Gottlieb, the FDA Commissioner, explained a solution to end the outbreak, confirming that “The FDA recently participated in discussions with the major producers and distributors of romaine lettuce in the U.S. and with the major trade associations representing the produce industry regarding product labeling and dating to assure consumers that any romaine lettuce that will come onto the market is not associated with the current outbreak of E. coli.”