The streaming giant falters with its competition to theaters 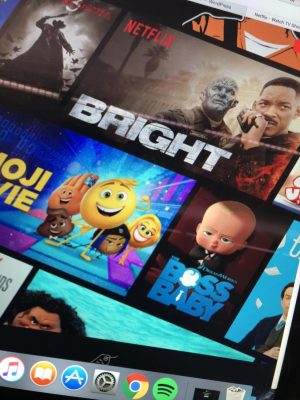 With the release of Duncan Jones’ Mute, fans and critics alike are becoming more skeptical of Netflix’s goals of expanding their selection original films.

The streaming service’ plan began last winter, with the expensive fantasy crime film Bright, starring Will Smith. Next came the surprise release of The Cloverfield Paradox, a sci-fi horror film and Mute, which was inspired by the likes of 80’s films Blade Runner and Chinatown. None of the projects have crossed the fresh mark at Rotten Tomatoes, a fact that worries subscribers, considering Netflix’s plans to release 700 original TV shows and movies by the end of this year. While students are a bit less negative, they are nevertheless unimpressed.

“Some of the movies have been good and some have been bad, you don’t really know what you’re going to get,” Woodside junior Bardin Fabian told the Paw Print.

Such a track record is also in sharp contrast to Netflix’s lengthy TV efforts, which started in 2012 with the hit political drama House of Cards. Many series like Master of None and Orange is the New Black have swept the Emmys, and few outright cancellations have occurred. It’s possible that the films have been shoddy because they haven’t been produced by Netflix, rather sold from studios and shopped around for clear profit.

“We made the film for cinema, I’ve got no problem with the small screen at all… I think there’s incredible potential within that context, but if you’re doing that — you make it for that [medium], and you think of it in those terms,” director Alex Garland said to Collider in response to a post-production Netflix sale of his movie.

Paramount, the film’s distributor, told the director it would be “too intellectual” for audiences and sold international rights to Netflix in order to guarantee instant success.

The Cloverfield Paradox, also produced by Paramount, was a more high profile example of this, partly because of Netflix’s advertising for it during the Super Bowl.

“That movie was even more disappointing because of the way they promoted it,” senior Brendan Peck said.

Netflix has avoided mentioning criticism in PR talk, focusing instead on record viewership numbers for the films. But these results can be skewed, as Netflix does not equate a view with watching the entire film. There is also a possibility they are only advertising movies that have a more widespread appeal, as nobody interviewed had heard of Mute, which was geared heavily towards sci-fi fans and later critically flopped upon release. Actors and popular genres are big factors for promotion.

“I heard about Bright because Will Smith was in it,” senior Justin Swan admitted.

Overall, Netflix will soon have to come to a decision to continue its original film program and in what form. They may either self-fund films, which have gotten mixed reception, buy finished projects from studios who are unsure of their commercial prospects, or both. Each option relies on an uneven release schedule, something Netflix has not faced when creating original television series.

“Out of the three movies they’ve released over the past six months, I’ve only sort of liked one,” Swan said.