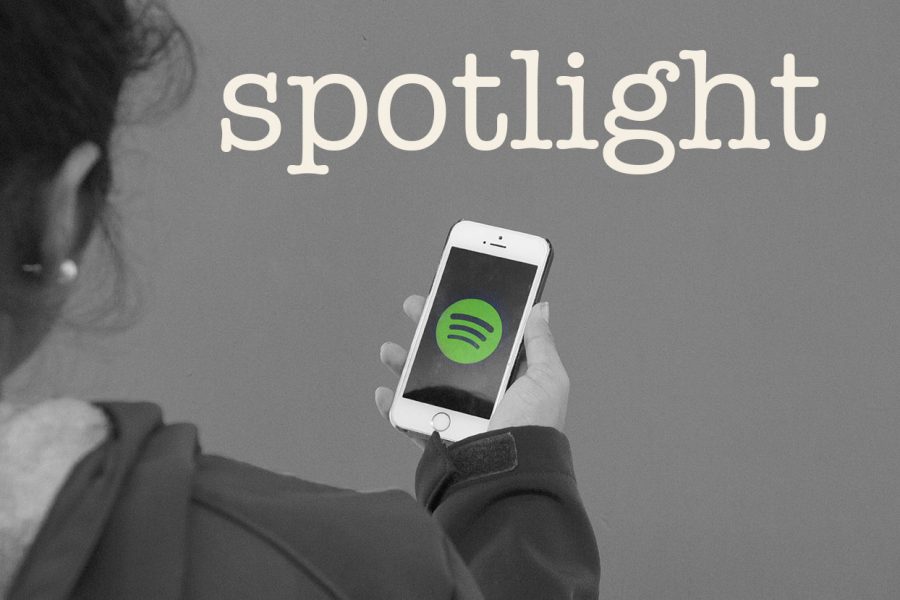 A student opens Spotify to use Spotlight, the popular music app’s new feature that displays unique visuals as users listen to podcasts and other audio.

“We are excited to launch Spotlight, a new format that merges great storytelling, news, information, and opinion with visual elements all delivered in playlists from across a number of content categories,” Courtney William Holt, Spotify’s Head of Studios and Video, announced.

With over 30 million songs and more than 2 billion playlists available on Spotify, it’s no surprise that music is a daily part of student life and productivity.

“Playlists play an important role in the daily lives of our users, bringing them closer to the creators they love,” Holt described.

As a fraction of Spotify’s soaring 140 million active users and 70 million subscribers, many Woodside staff and students use the popular app ― including English teacher Marissa Potts, who frequently listens to podcasts and music on Spotify.

“I think it’s worth seeing what kinds of visuals [Spotlight could provide],” Potts commented.  “It’s intriguing, but I’m not

necessarily sure if it’s going to make or break if I listen to a podcast or not.”

For most free work time in her classes, Potts allows her students to listen to music through one earbud and on a low volume.

“Some students can listen to music and it really helps them find the right headspace,” Potts explained.  “They can take any other distraction and create a cocoon for themselves.  Then I think other kids…would get too distracted in the song that they love, start singing, and then…get all off track. So I think you have to know yourself [well].  I grew up with music…so music is a definite must in my life.”

Listening to quiet, calming, and repetitive background songs without lyrics can help improve productivity, but ultimately music’s benefits while doing homework or studying depends on the student.

“I think it’s worth a shot to see if [listening to music is] a good study technique,” Potts elaborated, “but [you have] to be honest with yourself [and accept] that it might not work for you.”

Woodside sophomore Uri Dickman had not heard of Spotify’s new feature, but he intends to try using it even though he enjoys the app’s current format.

“I listen to music while doing math homework and computer science,” Dickman described, “but not anything else because it distracts me from reading.  I never listen [to music] in class.  I think for the most [part, listening to music] is bad for productivity.”

Cathleen Espinoza, a Woodside senior, is part of the forty-six percent of teens aged 12 to 17 that study while listening to music.

“When I’m doing my homework, I’m bored, so the music helps me ignore [my boredom],” Espinoza explained.  “I guess it’s kind of distracting, [but] it gets my mind off the homework.”

Despite not being a Spotify user and never hearing of Spotlight before, Woodside music teacher William Tolles is open to its potential benefits.

“[Spotlight] sounds wonderful,” Tolles remarked.  “It might help give a fuller picture of learning.”

Tolles also explained how listening to music affects student productivity in a variety of ways.

“For some people, it might be a distraction from their work,” Tolles reasoned, “but for others, it might help them relax and help them get their homework started… It really depends on the student― if they’re mature enough to use the music as motivation rather than an escape.”