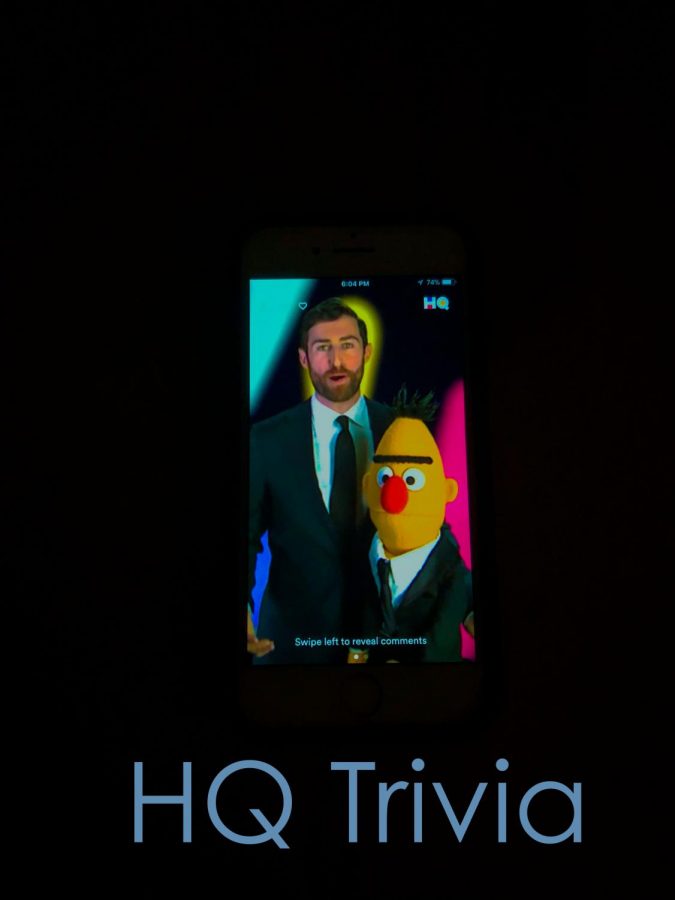 HQ Trivia starts with its host, Scott Rogowsky (and a special guest!)

Helmed by the creators of such apps like Vine and Jetsetter, HQ Trivia is the newest game to take over the App Store.

Tasking players to correctly answer 12 questions live for a rotating cash prize (typically between $1,500 – $10,000), the app has risen in popularity almost exponentially. In fact, upon launch it typically had 20,000 players, but it has since increased to 600,000 and 1 million in less than three months.

Brendan Peck, a Woodside senior, was one of the first to hear about the game, and commented on how he heard about it before it became so popular.

“I heard about it from my family, [and] when I started playing, I never saw the game go above 50,000 players,” Peck said.

With the new popularity has also come some additional controversy. Sexual harassment allegations have concerned one of the game’s creators Colin Kroll, while the other creator, Rus Yusopov, was caught sending an angry letter to news platform The Daily Beast in response to an unpublished interview with the show’s host, Scott Rogowsky. (https://www.recode.net/2017/12/18/16752796/hq-trivia-founders-fundraising-bad-reputation-creepy-behavior-twitter-vine, https://www.thedailybeast.com/ceo-of-hq-the-hottest-app-going-if-you-run-this-profile-well-fire-our-host)Both actions have given investors pause, and fundraising prospects are still ongoing.

Many players of the game, though, are unfamiliar with such controversies, when asked, and news sites that have covered the game’s PR issues have only focused on the latter blunder.

Additionally, there have been major issues with the game itself. Some have complained about how the game only allows players to receive cash if it’s over $20 (as money is split between how many people win the last question), and the 90 day limit to redeem it. Many were surprised by this- in particular, with some devoted fans of the game being unfamiliar of the rule.

“I’ve fallen into the game in recent days, so to hear that is sort of disappointing,” said junior Scott Morimoto.

Bugs have become more common with the added player base, and some find themselves being kicked out of a game even when answering a question correctly due to lag. Issa Wehab, a store manager, recently found himself in such a situation.

“It happened on the first question, [and] the questions and answers didn’t show up until it was too late and I was disqualified,” Wehab described.

Nevertheless, the game is still receiving high popularity and plenty of new players. For example, Woodside senior Mitchell Hansen eventually warmed up to the game after other friends started playing it.

“I wasn’t really interested at first,” Hansen said, “but now I play it more than most of my other friends.”