The Popularity of Spanish vs. Mandarin 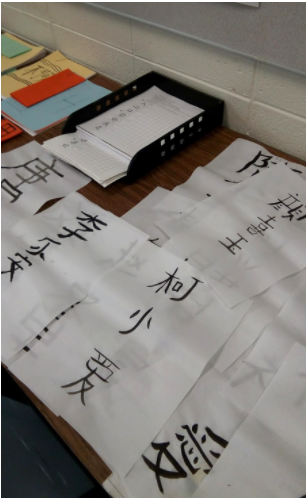 With only about 45 students enrolled, fewer people take Mandarin than Woodside’s other foreign languages― yet over one billion people speak Mandarin fluently, making it the world’s most spoken language.

The language uses a distinct character, rather than a combination of letters, to represent each word.  “Some of the students are… a little intimidated by learning Mandarin because it’s a different system,” Xu states.

The combination of Mandarin’s lack of an alphabet and its differing syntax makes it a challenging language for English speakers to learn.

Andrew Ngo, a sophomore taking Mandarin 2, points out, “You would say ‘my six has family,’ not ‘my family has six people’… it’s different from English, and people want easy classes to take.”

Although the exoticism of Mandarin may deter students, Ngo enjoys his language class.  He describes it as interactive and self-guided, with a multitude of cultural games and videos.

“More students are taking Spanish than the other languages we offer,” asserts Amy Hanson, a Woodside Spanish teacher.

“Most students think [Spanish] is useful because so many people in California speak it,” comments Karen Dorsey, another of Woodside’s Spanish teachers.

California has the second-highest percentage of Spanish speakers, with over 58% of Californian citizens fluent in it.  Since 56% of Woodside’s students are Hispanic, communication is a key factor in a student’s choice of foreign language.

Milena Raeber, a tenth grader taking both Mandarin 2 and Spanish 4, says she took Spanish due to its relevance, but she chose Mandarin mainly for fun.  “Here, not as many people speak Mandarin, so there isn’t a demand,” Raeber explains.

Despite the prevalence of Spanish in the United States, students hoping to travel abroad may find Mandarin more helpful.

While Xu believes that learning any second language benefits your brain, she also hopes more students will choose Mandarin in the future.  Xu concludes, “To learn another language actually helps you better understand your own… but the number of Mandarin students is definitely increasing.”