How will Manchester change concert security? 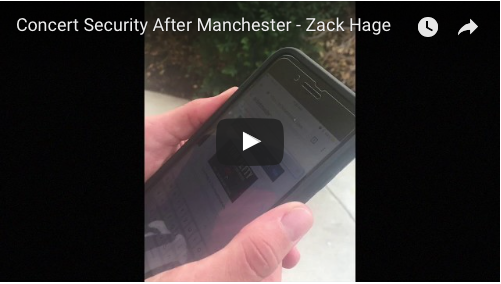 Following the recent Manchester attacks, new conversation has risen around whether music venues have proper security standards, and the effects if such levels of surveillance were to be upgraded.

Such security discussion is the more impactful than ever, since improved security could send concert costs skyrocketing. A cost of a movie or play is pretty inconsequential when compared to a typical venue price, and it’s likely some won’t want to place more expenses on extra precaution. It’s also important to note that these prices will not only be raised in light of concertgoers, but also those performing, as attacks prior to Manchester have sometimes targeted artists themselves (Ex: Eagles of Death Metal, Christina Grimmie).

In an interview, Woodside Audio Production teacher Raphael Kauffman bluntly agreed with such sentiment, while also placing some question on efforts to fix security first and foremost. He believed that the price may not have to be raised if what happened in Manchester was the result of guard incompetence or faulty security, meaning the price issue may be avoided entirely.

“I think generally speaking, people don’t like to pay more for anything, although I do think it should be part of the conversation to decide how what happened in Manchester happened. For instance, how did the bomb get through security?” Kauffman stated.

Based off of others I interviewed, it’s possible a lack of security change might be a root cause. Junior Ronald Barulich commented on this, providing insight following his concert experiences of the past five plus years.

“I’d say concert security has stayed the same. I’d scarcely see guards placed in strategic points, but other than that, that was about it” Barulich answered.

Meanwhile, concertgoers of decades past seemed to point to the same absences of security acceleration. While attending concerts in the 80’s and 90’s, Abbas Hage did notice an abrupt change to the ones he attends now, which could signal a factor behind events such as Manchester and the Bataclan shooting in Paris.

“I really think the security is a lot like today, but I think that the security seems less professional when compared to back then. The last concert I went to there weren’t as many, this could maybe  be because of a reliance on cameras” Hage said.

Overall, concert security is starting to become a dominant issue, yet its unseen on how this may affect not only the price, but also the  layout of concerts. One thing though, can’t be denied, and that’s that this is an issue with many loose ends.

“It’s an uncomfortable issue, and in the end, I think many concertgoers would not like to worry about it” said Kauffman.