The Paw Print • May 30, 2017 • https://woodsidepawprint.com/culture/2017/05/30/siliconvalleyprobs-the-newest-instagram-trend-sweeping-the-bay-area/ 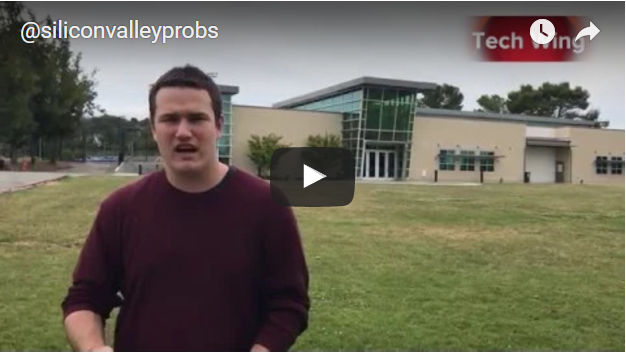 SILICON VALLEY, California — The Tech Olympics. Highway 280’s Flintstone House. High schools nicer than college campuses. These are some of the topics posted on the popular Instagram page @siliconvalleyprobs.

The page, which mainly posts memes and jokes satirizing the Silicon Valley, currently has about 19,500 followers on Instagram and posts new content nearly every day.

The creator of @siliconvalleyprobs, who wishes to remain anonymous, told the Woodside World in an exclusive email interview, “This page took a while to grow. It took me about four months to get to just 1,000 followers… I was definitely surprised to see just how popular it became.”

Although @siliconvalleyprobs may not post content specific to just Woodside High School, many Woodside students enjoy the jokes and memes on the page.

“I think it’s really funny, and I think they’re really real about it,” Woodside junior Evan Farrar states. “It’s what we’re all thinking, but we don’t actually say, so it’s nice.”

Some Woodside students, though, may find the page funny but not relatable to their personal lives.

Even though the page may get some negative feedback, that does not stop the creator from posting content on the page.

“People told me my posts were cancer and all around not funny, but I didn’t really care,” states the creator of @siliconvalleyprobs. “I don’t really run this page for the feedback; I run it because I just crack myself up, and it makes me happy.”

The page satirizes and jokes about the wealth and affluency of the Silicon Valley, but the area was not always as wealthy as it currently is and the page does not reflect the experiences of the older generation.

Woodside PE teacher and Redwood City native Laura Perdikomatis muses about the recent changes to the area: “I think it’s changed less on the coast-side. [People from Pacifica] are really resistant to change, which is good, in my mind, unlike here, which has changed a lot. We’re right in the thick of it here in Woodside.” Perdikomatis currently lives in Pacifica.

Most of the change has been bittersweet, as the tech wave has created new jobs and income for the whole Bay Area, but incredibly expensive housing have forced people to move out of the area.

“I think that a lot of people are upset about [the change] and rightfully so,” Perdikomatis states. “[But] there is some good that has come out of it too; the change has brought money to this district and… has helped a lot of students.”

With the changes to the Bay Area in the past two decades, @siliconvalleyprobs satirizes the current state of the region perfectly, according to students.

Farrar states, “I think that there are a lot of things to joke about, about Silicon Valley, and the people that live here. I think it’s good,… it’s like self-deprecating humor.”

The creator of the page also has no intent of slowing down the output of content from @siliconvalleyprobs.

“I’m hoping to ‘pass the account down’ to a new generation of admins,” the creator states. “I already have a co-admin who is a junior, and I may bring in another admin to keep the account alive.”

With new content to be continually put up on the page, some Woodside students want the page to retain the unique flair that it currently has.

“I think it has its own identity and I think that is really nice,” Farrar states. “Like it’s very different to everything else that I’ve seen and it’s very original and should stay that way.”