Bill Nye is Back! 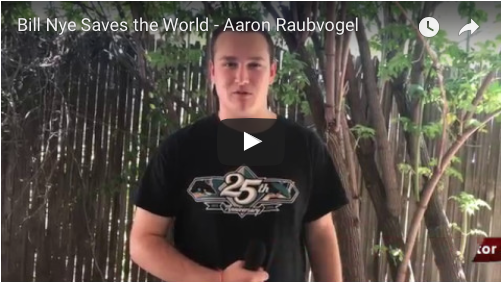 What most people do not know about Nye, or ‘Bill Nye the Science Guy’ as he is best known, is that after his show went off the air in 1998, he has created a life for himself of political activism and has become a champion of science.

“I respect him a lot as a person,” states Woodside junior Devin Dohrmann. “I think he’s very smart.”

In the years following The Science Guy, Nye has been an ardent defender of environmentalism and evolution, has written several books and starred in a few TV shows, and has kept a fairly prominent online presence on Instagram and Snapchat.

Dohrmann states, “I think as time has gone on he’s transformed into more of a societal figure.”

With antiscience movements on the rise, Nye has decided to return to television with a new show, Bill Nye Saves the World, aimed at adults and the older crowd rather than young children with The Science Guy.

Each episode of the new Netflix show deals with a different topic, such as computers and Artificial Intelligence, alternative medicine, and vaccines. This format is similar to The Science Guy, except it caters towards an adult audience and is related to modern day topics.

“I don’t think anything can compare to what he did before,” Mills stated,  “But I think [Saves the World] is going to be pretty good.”

The most memorable part of The Science Guy was the theme song for many people, and Nye’s new show would not be complete without a catchy theme song.

Mills states, “Honestly, the only thing I remember [from his old show] is the theme song.”

Even though most people only remembered the theme song of The Science Guy, it still made an impact on their opinion of science.

“It made science more enjoyable, kind of like how the Mythbusters did,” Mills stated, “It kind of made it, a lot more entertaining.”