Stories on Coming Out 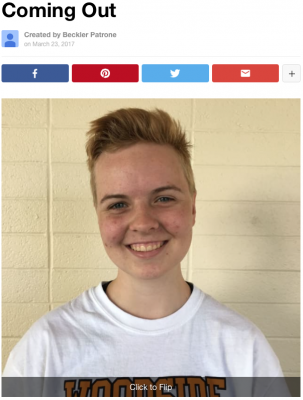 It’s no secret that people go through a lot when they are teenagers in order to figure out who they are. Whether it’s what they want to be when they grow up, or what their sexual preference is, everyone goes about blossoming into their adult life in different ways. Some might find out who they are in the middle of class or a park, so suddenly that it shocks them. Others may find out who they are over months or years of thought and worry that take over their very existence. In this case, people go through many struggles trying to determine what their sexuality and/or gender is. Many of these people have had an inkling of what or who they are in the back of their heads for years until they finally come to terms with it, whereas others never think about it until it suddenly clicks. During their childhood, members of the LGBTQ+ community have experienced their sexuality and gender in different ways and therefore have gone about coming out in an array of .

The following is a collection of stories from high school sophomores and freshmen at Woodside about how they discovered their sexuality and/or their gender as well as how they came out to their family and people around them. Their experiences range from sad and depressing to just another moment in their life.

I’d always known I didn’t feel attracted to just guys, but I never knew what it meant or what to call it. Really, it just never came up. I grew up in a catholic household and went to a catholic school until now, and anything related to homosexuality was never talked about. One my best friends had always been interested in the topic, so sometimes my group of friends would talk about it, resulting in me understanding how I felt and who I liked and all that jazz. He later on came out as gay and the entire school, including the principal, ended up finding out, and it changed everything for the school. More people came out and I was coming closer and closer to the conclusion that I might have been gay too. But I was never sure. I hated labels, and never wanted to be labeled as lesbian or bisexual or even straight, so I’d just tell people I was questioning. For a little bit, I called myself pansexual, but soon I felt uncomfortable saying that, and fell back into not wanting to be labeled. I still don’t like labels, to be completely honest, and prefer not using them that much, when it comes to sexuality and gender. I came to the conclusion that I liked girls, boys, and anyone in between, and just stuck with bisexual. In all honesty, I don’t care what gender my next partner could be, and I’d love someone even if they didn’t identify with any gender. I came out to my mom last month, actually, in the car on the ride home from musical rehearsals. I ended up rambling on about how I wasn’t sure if I’d regret what I was about to say, and that I love her and never want her to stop loving me, before just blurting out that I was bisexual. She sounded a little uncomfortable, but she said she was ok with it. We didn’t talk much about it after, and sometimes she’d ask me how I even knew when I’d never dated anyone. She was on the ropes with it, but it’s getting better. I haven’t come out to my dad, and I don’t plan to anytime soon, because he has made homophobic remarks and I’m afraid too, but hopefully I will soon. I’m still coming to terms with my gender/pronouns because I’ve always felt genderless and haven’t been very connected to any given gender. I don’t have any prefered pronouns, and feel totally fine with someone even calling me a man. It all doesn’t feel very worth it to me, gender is just another hindering factor to me, and I like living as me and not any gender really.

Ok so, I suppose I should preface this by saying that when I was younger I really had no idea who I was. I really just followed what people told me to do, and I didn’t like sticking out from the pack. Though I was always pretty feminine, I was pushed to do a bunch of stereotypically male activities, of which I hated them all, and I was just overall pushed to fill a male role by society and slightly by my parents; they made me try sports and stuff, ew. Skipping forward a bit, these horrible kids from my middle school used to use the term gay to insult me, which kind of created this negative connotation in my mind. Though, by the end of my 8th grade year I was beginning to think that I may not be straight, as I really didn’t have much attraction to females. Early in my 9th grade year I “came out” to a small group of friends as gay and had my first boyfriend in January of 2016. Shortly after that I was really out to everyone. Despite all this, not everything felt completely right to me, and so I began questioning my gender. I arrived at the conclusion that I was transgender, though I chose to ignore it because of the hardships I knew I would face in my life. Though, due to worsening dysphoria, I began again to figure out my gender and finally admitted to myself, after trying a non binary gender for a couple months, that I am indeed transgender. So, that brings us to now in which I currently go by Julia, or Jules, that’s still my nickname, and female pronouns. I suppose there could be backstory on the transgender too. It really fits in with the push towards this stereotypical male role by society as I mentioned earlier, but I didn’t really identify with any gender when I was younger, though I didn’t know what to call it back then. Though eventually I grew and realized that I am a transgender female.

I guess you could say that i wasn’t straight when in like 7th grade when like one of my best friends came out ‘cause you know it made me start thinking about myself and everything and I never and I never really felt any attraction towards guys and so that lack of absence and romantic feeling towards guys made me realize that maybe I’m not so straight as I thought I was. SO so on so forth I did a lot of research and took some time to myself to think about it but you know you don’t really have to force yourself to figure out, you’ve got your whole life to do that and that’s all one big journey so, just take it one step at a time and thats what im doing right now.  I haven’t exactly come out to my dad but he knows so that’s just nice. So He’ll drop all these little hits to me and be like, “yeah you know Rus. He was my best friend, and he was gay too and he was my best man at your mom and mine wedding. So it’s just nice that he’s not really forcing me to do that, but he’s letting me know it’s okay.

There are several times that I came out and most of them ended up being kind of funny, goofy, and weird. How I came out to my mom was that I was one day sitting in the kitchen and she was doing the dishes and all of the sudden she was like “Time to talk about sex!”. She was like promise me you will always wear a condom, I don’t want teen pregnancies. I was like “Oh don’t worry mom, I don’t need to wear a condom,” and she was like “No! STDS! Pregnancies!, the pulling out doesn’t work!”, and then I was like, “No, Mom…. I’m so gay!” and the she said, “Oh okay!…But STD’s are still a problem…” That was how I came out to my mom, and that was the end of the story for that, it was kind of nice to have it normalized like that. Basically how I figured out I was gay, I was like “Ew!, penises are ugly!” and then I was like, “Wait, Am I gay?!”, and then it was like “Oh I’m Gay.”