Is Apple Running Out Of Ideas? 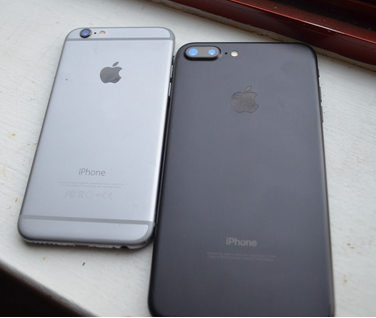 Controversy struck Apple users when the worldwide company announced they would eradicate the headphone jack on the new iPhone. Apple recently unveiled a new line of products and software that aims to innovate ahead of competition.

The new iPhone 7 presented at the Apple Keynote is now waterproof, and features a dual-lens camera that is comparable to a DSLR. The new products also boast a longer battery life and a processor that doubles the speed from the previous iPhone model.

Complaints about Apple’s lack of new ideas has been a constant topic amongst technology users, and this decision from Apple left many users in question. Thomas Hinman, a freelance composer, feels Apple has not released an innovative product in years.

“Their spectrum of technology has certainly weakened,” Hinman said. “They began the trend of repeating designs on their products, and every year I lost more interest. I’ve seen the new iPhone and I’m not impressed. Even if you take the iPhone out of the equation, lack of creativity is a habit Apple needs to break.”

While iPhone fanatics continue to complain about innovation, Apple has thrived as a company in recent years and has proven to have an increasing amount of profit as more products are announced. John Parsons, an Apple store manager and technology expert, thinks Apple has remained relevant due to their motivation in providing what users want.

“Every year I get excited when Apple announces new products,” Parsons told Woodside World. “That is because I know whatever they release will eventually satisfy Apple users, and it will set a base for future technology. People got upset at Apple for choosing to remove the headphone jack, without realizing Apple is known for being the first to try something new.”

A recent poll taken at Woodside High School amongst 270 students showed a mere 30 students that said they planned on purchasing the new iPhone. The remaining students in the poll claimed the new iPhone was either too expensive, or too similar to it’s predecessor.

Gabriel Ruvinsky, an avid technology user and video editor, is against the iphone particularly due to the company’s decision to remove the headphone jack.

“I will most likely not purchase the new iphone. It was a bad idea to remove the headphone jack” the Junior said. “I do understand it is hard to release new, innovative products when you’ve released close to what every Apple user could want.”

Apple’s new announcement of products led to 4% rise in the company’s stock, which experts believe is  respectable considering previous years when Apple releases led to a drop in the stock price. Stock analysts for Apple have recently raised the target price for the share, as they expect sales on the new iPhone to lead the company to a reputable earnings report.

“We are very grateful to have loyal users to Apple that are excited whenever we release a product,” John Parsons said. “We want to keep it this way, which is why we strive for user satisfaction. If the buyers are not happy with their product, neither are we.”