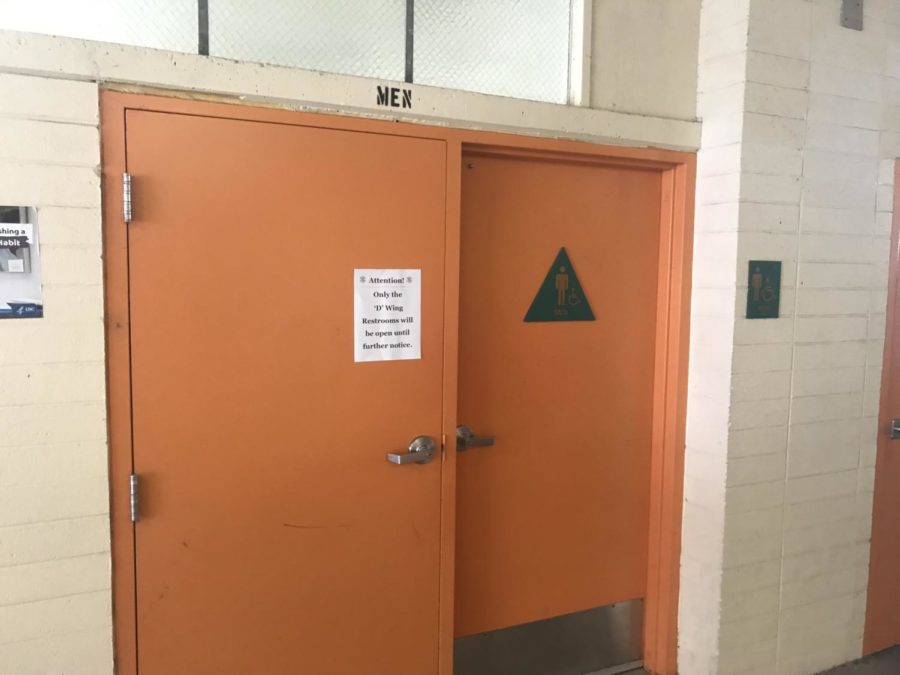 A sign is posted on the F-wing bathroom door letting students know of Friday's closures.

Starting Friday, Woodside has closed almost all of its bathrooms “until further notice.”

These closures come after reports surfaced that morning of a vandalized sink in the J-wing.  Only the D-wing bathrooms across from the College and Career Center (D-7) remain open at this time.

“There were some extreme cases of vandalism happening at all the restrooms,” Woodside Administrative Vice Principal Charles Velscow stated.

Aside from the sink, multiple bathrooms around campus were also reported having vandalized soap dispensers, including in the J and D-wing bathrooms. Velschow, who was supervising the D-wing bathroom during lunch on Friday, says he is disappointed in the reports.

Students have also been sharing their frustrations regarding the closures, saying it will take too long to get to the open bathrooms in time.

“I hate that because I don’t want to walk so far just to go to a bathroom,” sophomore Arielle Doernberg stated. “What if I’m in the J wing and I can’t go to the J-[wing] bathroom? Do I go all the way to the D-wing? It’s so difficult.”

The Devious Licks challenge on TikTok is believed to be the reason behind the recent vandalism. The new trend consists of students recording themselves stealing or defacing school property, then posting videos of their actions. TikTok has since taken down any hashtags related to the trend, and it is unclear if the vandalism at Woodside was meant to go up on the site in the first place. Some students say the closures will only push the trend further on campus.

“I think closing the bathrooms will only encourage students to break and steal things, because that is what I feel encouraged the do,” senior Aidan Ohline joked.

While no exact date has been given for bathrooms to reopen, Velschow says it might be a while.

“[The bathrooms will be opened] as soon as we can see that there will be no more vandalism taking place,” Velschow said.

UPDATE 9/27/2021: As of brunch on Monday, the girls bathroom in the F-wing has been reopened for use

This is a developing story. The article will be updated if more info is made available or any changes occur